A new limited edition Dogwood tshirt is now for sale over on the TeeBlaster site. Get this limited print on Black or Forest Green shirt and in sizes small-xxxl (for men). There is also a black tshirt available in women’s sizes.

Look for more limited edition tshirts by a few old school bands in the future. For now enjoy these two shirts and tell all your friends to pick one up.

The current plan is to relaunch Indie Vision Music in July 2016 (yes, next month). Next month just happens to be the 16th anniversary of the founding of IVM. Get ready!

Thanks for all the support and for following my blog.

I have found the lost Punk Never Dies compilations and decided to upload them to the Indie Vision Music Bandcamp page for FREE Download. These two compilations originally appeared on Indie Vision Music.com as FREE Downloads back in 2011 and 2013 respectively. Go get em’ and enjoy! You can also find a rare 2 song Dismissed download featuring “Demos” originally recorded with Scott Silletta (Plankeye/Fanmail) back in 2001. Check those out below.

A new band has arisen. That band with their heavy punk leaning sound has come out strong with their debut “Self Titled” full length. The band is called Brookhurst and would be recommended to fans of Over It, Much the Same, Craig’s Brother, Slick Shoes, and Inspection 12. The group actually features members of Craig’s Brother, Hey Mike, Goodbye Valentine. They are from Los Angeles and hold true to that sunny California punk sound so many bands aim to create. If you’re searching for the next punk rock band to call yourself a fan of, look no further than Brookhurst. Listen to the album below and pick it up wherever fine digital music is sold (iTunes, Amazon, Google Play, Bandcamp).

Exclusive: A Common Goal – Where Do We Go

I am proud to bring you an exclusive song stream from Boston punk rock band, A Common Goal. The song is a cover of a False Idle song titled “Where Do We Go” done with that old school A Common Goal punk sound. This song will appear on the upcoming “Split Decision” release with False Idle due out December 16th on Thumper Punk Records. Listen to the song below. If you’d like to take a listen to the False Idle song premiere over on Indie Vision Music, click here.

I am very excited to announce that I will be premiering a brand new song from Boston, MA. punk rockers,  A Common Goal taken from their upcoming “Split Decision” co-release with fellow punk band, False Idle. The song is a cover of False Idle’s “Where Do We Go” and will stream right here at Freedom Like a Song beginning on the morning of November 17th. The split release will go up for pre-order soon via Thumper Punk Records.

Craig’s Brother are in the final stretch of their kickstarter campaign to fund a new Ep and 7″ titled “The Story of How We All Died”. There are just 15 hours left in the campaign and they are 39% funded of their $8525 goal. Consider contributing to this campaign by pre-ordering the Ep/Vinyl right here. I’ve also included a little Spotify playlist of some CB tunes to listen to below to refresh your memory. Let’s get this funded!

Former Rufio singer, Scott Sellers, starts new band called Mercy Street and completely blows the lid off the pop punk genre. What his band had accomplished in the past decade with Rufio is turned up to 11 on this new full length under the Mercy Street name, and then some. Picking right up where Rufio left off on their last proper full length “Anybody Out There” but heading in a more edgy, less “commercial” direction. Songs like “Building Tolerance”, “Out of the Question”, “Guilty Conscience”, “Caught by the Wind”, “Die Young”, and the great closer “We See the Ending”, show the band at their strongest, most captivating. This band hits you over the head with a two ton hammer of alluring pop-punk and doesn’t relent for the entirety of “Let Me Live”. If you’ve been on the hunt for a straight forward, fast, and melodic, slightly aggressive, pop punk record with a bite, look no further than Scott and his band or ruffians called Mercy Street. Recommended for fans of old Slick Shoes, Rufio, old old AFI, New Found Glory, Much the Same. Listen here: 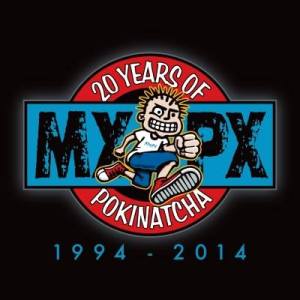 It’s hard to believe that 20 years have passed since the release of “Pokinatcha”, the album that put this little Bremerton Washington pop-punk band on the map. I still remember walking into a “Christian Bookstore” (remember those?) a year after it released and discovering this band everyone was beginning to talk about and going “Whoa!”. It was under produced and RAW but had that punk rock spirit and real heart. If it weren’t for bands like MxPx, Plankeye, The Blamed, The Crucified, Stavesacre, Focused, Strongarm, Unashamed, Bloodshed, Blenderhead, and all the other amazing faith based artists of the time especially Tooth & Nail Records. I probably wouldn’t have given thought about rekindling/recommitting my life to Christ which would have caused a chain reaction disrupting the space time continuum to where I’m at today 😉 Seriously, I am so grateful for these bands and especially the music of Mxpx. So thank you Mike Herrera for sticking with it all these years and fighting the good fight against all odds. Read a little retrospective by the band as posted on facebook today and a video from Mike, below. -Brandon Jones / Freedom Like a Song

END_OF_DOCUMENT_TOKEN_TO_BE_REPLACED

I’ve been browsing the net and came across this great female fronted punk rock band called ForeverAtLast from Indianapolis, Indiana and as expected, they RULE! You can watch a studio video for “Mr Whitecoat” above. Check out ForeverAtLast on Facebook / Twitter. Check out their 2012 album here on iTunes. Check out an older video for their song “Paper Hospital”, below.

END_OF_DOCUMENT_TOKEN_TO_BE_REPLACED

This is my first official “blog post” here at Freedom Like a Song and what is more fitting than to discuss a little PUNK ROCK, one of my favorite genres and pastimes. So let’s light a fire and pump our fists in the air. Make sure to check out Freedom Like a Song on Facebook / Twitter.